The startling scheduling hack that can increase your productivity, morale, and innovation at the same time! | InspireHUB 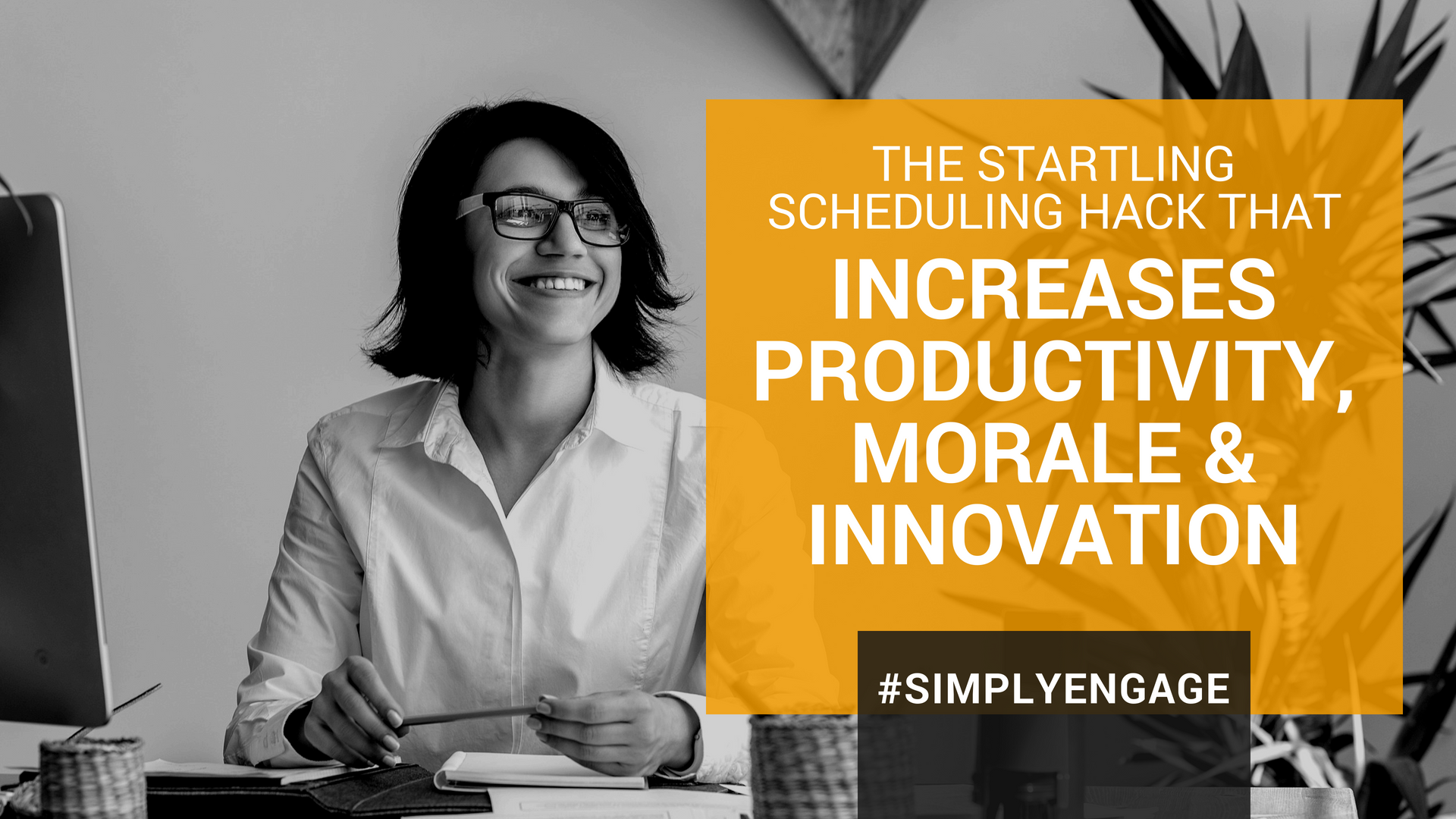 When we started InspireHUB, we knew that a “start-up” culture meant that we could expect long hours and days.  We were no exception as our small team passionately pursued our dreams. As the leader of our team, I had only one rule and that was that I requested everyone take one day off every seven days.  (Back then, it wasn’t unusual for us to work weekends. Welcome to startup life.) Some followed it, some did not as they elected to try and get ahead of their work.

To say our team was “highly engaged” would be an understatement.  Requests from managers for staff to take extra time off (meaning working a normal work week like everyone else) was met with protest.  Our team wore their efforts like gamified badges even bragging about “starting second shifts” when the normal people of the world went home.  We were putting out huge amounts of code and work products. The team was passionately engaged. We were living the startup dream!

We were in serious trouble.

About eighteen months later, we were all tired.  We noted that we were still putting in the same amount of relentlessly long hours but our productivity was suffering miserably.  The pace and the length of hours were simply not sustainable. However, the amount of work was not going to magically dissipate and like any startup we were tight on resources.

How to do more with less.

That’s when we decided to take time in the midst of all that “had to be done right now” and research how we could do more with less.

We looked at how Google gives their employees 20% of their time to work on being creative.  Our developers had already been provided this option but we were still struggling with scheduling and feeling like we were never quite getting ahead. We found our answers not in other tech companies but in hospital management. An article published in February 2014 called “Cut Your Company’s Fat but Keep Some Slack- Why excess capacity leads to greater efficiency.” offered us the solution we were seeking.

The article discussed the operating rooms of St. John’s Regional Health Center that were running at 100% capacity.  (Sound familiar? It did for us too!) They brought in an outside consultant who gave what sounded like crazy advice. Leave one room empty.  They were already running at capacity, falling behind, and the consultant was recommending to remove an entire operating room?

It ends up it was a genius recommendation.  As the article pointed out “On the surface, St. John’s lacked operating rooms. But what it actually lacked was the ability to accommodate emergencies. Because planned procedures were taking up all the rooms, unplanned surgeries required a continual rearranging of the schedule.”

The moment we reviewed the article a light bulb went off for everyone at InspireHUB.  Our schedules were definitely planned but we needed to incorporate “margin”. Giving our developers 20% of their time to work on creative solutions was a step in the right direction but we needed something more.  We tested and tried a few different things until we finally landed on what is now called “ShipIt Fridays” (in honor of Atlassian’s ShipIt Days) and also because of our ability to get things done and out the door.

So, what’s the secret?

Wait for it.  There are no meetings pre-planned anywhere in our company on Fridays.

Yes, you read that right.

As a remote workplace, we had our hesitations.  If we weren’t checking in with one another in regularly scheduled meetings (like we do every day of the week), would employees abuse it to simply start their weekend earlier? Those seemed like legitimate concerns at the time as we started to implement this new idea.

The reality is that the operating room story should have put our own concerns to rest as we ended up having the exact same experience in our own company. Here’s what happened at the hospital per their article:

“The hospital can’t predict each individual procedure, but it knows that there will always be emergencies. Once a room was set aside specifically for unscheduled cases, all the other operating rooms could be packed well and proceed unencumbered by surprises. The empty room thus added much-needed slack to the system. Soon after implementing this plan, the hospital was able to accommodate 5.1 percent more surgical cases overall, the number of surgeries performed after 3 p.m. fell by 45 percent, and revenue increased. And in the two years that followed, the hospital experienced a 7 and 11 percent annual increase in surgical volume.”

Just like the hospital system, businesses all have the need for margin in their schedules.  No matter how well we plan emergencies arise in different ways. While it may not be the life and death situations of emergency hospital rooms, it can still be mission critical items.

We quickly discovered that our Fridays ended up being used for those unscheduled important meetings and items that really shouldn’t wait until the next week. They also became a source of refuge for our team. Meetings that are held on Friday usually tend to be time-sensitive and laser-focused to address a specific situation or issue that requires attention.

While every Friday may have the occasional meeting requiring attention, it just as often has no meetings.  So, what about our fears around implementing this system?

What have we learned?

Here are some bullet points:

Let us help you take control of your internal communications!

Let us show you just how much we can help you save in time and money while increasing your employee engagement. Our proprietary ROI calculator will help you understand the impact to your organization.

so you can see exactly what these statistics actually mean in hard dollars in your OWN company.

Looking for a few more great ideas?  Check out ...

▶ The 3 most important reasons you need to stop the email madness ... right now.

You're exhausted. We get it! And if your boss isn't convinced that your "email fatigue" is a real problem, we've done your homework for you so you can send up the SOS. What your boss cares about is the bottom line. Here's a primer to help you make the case that it's time to handle internal communications in a different way.