Progressive Web Apps (PWA's) have had a banner year.  For a relatively new arrival, users have been enjoying record speed successes with PWA's like the IHUPApp powered by InspireHUB Technologies.  This fast, affordable technology is catching the attention of municipalities who are looking for innovative ways of engaging their citizens. In 2016, the Town of Tecumseh became the first municipality to introduce a Progressive Web App into their community’s framework. InspireHUB Technologies worked with the Town of Tecumseh to create a personalized PWA experience for their residents to increase citizen engagement. Implementing a PWA offers a range of features that have proven to help municipalities in community interaction and communication. Progressive Web Apps increase engagement because of how easy it is for all users, perfect for a city looking to make intercommunication simpler.

Because Progressive Web Apps bring speed, security, and responsiveness to the user, many municipalities are seeing just how effective developing a Progressive Web App can be. PWA’s operate like the native apps a user would download from the App Store or Google Play, but unlike many native apps, Progressive Web Apps can function offline, regardless of device type or server, making them extremely accessible for everyone. But what features of a PWA offer such positive effects? Let’s take a look...

Accessibility
While many apps are dependent on specific mobile services or device type, Progressive Web Apps are universally accessible, allowing an entire community to use the app from their smartphone, laptop, desktop, or tablet. When users have to search for an app via an app store, many users stop the downloading process. With a PWA like the IHUBApp, users have accessibility anytime without downloading restrictions.

Visibility
The content within a municipality’s Progressive Web App is much easier to find through search engines, unlike some native apps. Content in native apps is often hidden from search engine users looking for specific content, while progressive web apps can be discovered by the content they provide.

Scalability
The scalability that PWA’s offer communities is key in making PWA’s so beneficial for municipalities. The easy-to-use interface of the IHUBApp helps to enhance the reach a local government has to communicate with their citizens, improving the two-way communication that communities desire.

The IHUBApp powered by InspireHUB Technologies customized for the Town of Greater Napanee equipped the town with tools to increase citizen engagement because of the ability to participate in real-time surveys and polls, promote community fundraising and volunteer opportunities, register for events, and allow users to upload their own content as well.

The IHUBApp enterprise-grade platform is offered in the U.S., Canada, and Australia to help keep communities connected at a fraction of the cost of native apps. 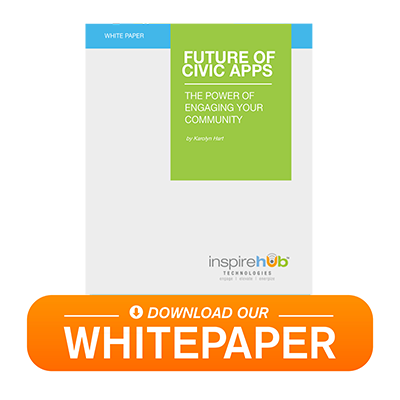