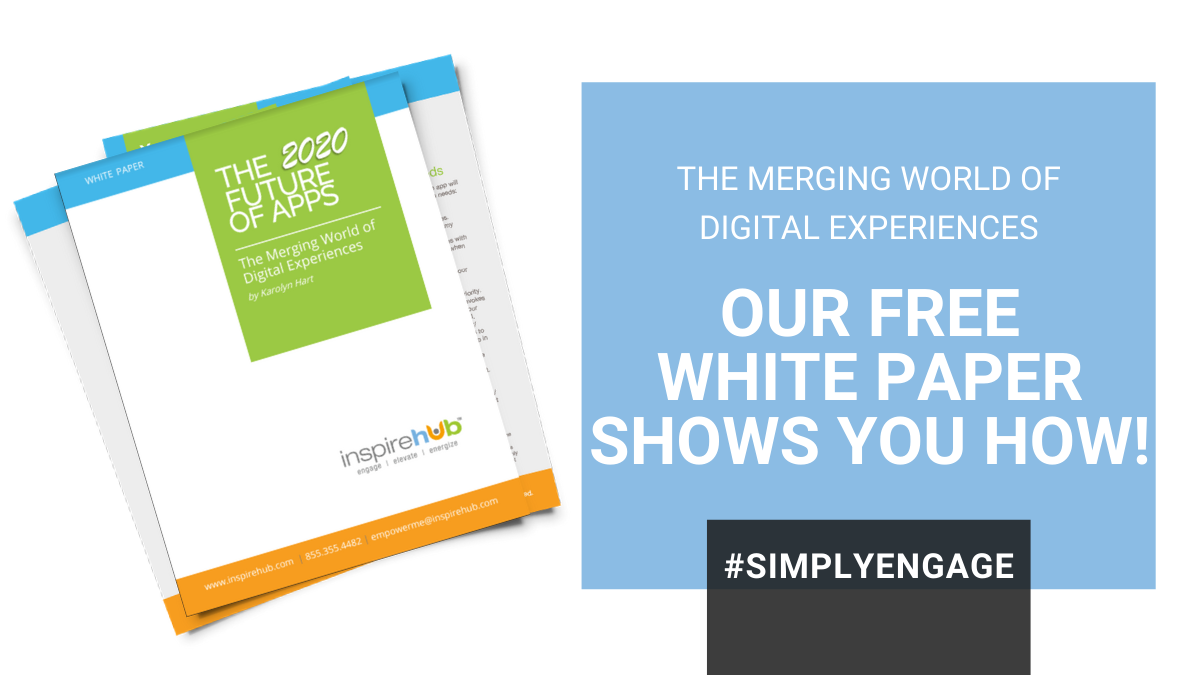 DALLAS, Jan. 15, 2020/PRNewswire/ -- InspireHUB Inc. announced the release of the company's latest white paper, "The 2020 Future of Apps: The Merging World of Digital Experiences." The 2020 white paper discusses the maturation of Progressive Web Apps (PWA) and how the latest intelligent technologies are blurring digital experiences in surprising ways.

END_OF_DOCUMENT_TOKEN_TO_BE_REPLACED

"Marketers and businesses have been cautioned that a ‘mobile first’ strategy was dated.  The arrival of PWA has made it extinct and a ‘digital first’ approach that is device-agnostic is the new reality," explained Karolyn Hart, Founder of InspireHUB.

END_OF_DOCUMENT_TOKEN_TO_BE_REPLACED

Dallas, Texas, February 13, 2017 - InspireHUB Inc. announced the release of the company’s third annual whitepaper “The 2017 Future of Apps: The Next Generation of Apps Arrives”.  This latest whitepaper includes exclusive insight on app trends and industry predictions from tech leaders Google and Samsung.

"As we enter 2017, we are delighted that technology thought leaders from both Google and Samsung have participated in providing their upcoming predictions as part of this whitepaper," explains Karolyn Hart, COO of InspireHUB Inc.

END_OF_DOCUMENT_TOKEN_TO_BE_REPLACED

Creating native apps as a way to increase civic engagement has been an aspiration held by most cities and towns but the costs associated with development has been prohibitive for both large and small communities.  How costly? Government Digital Service in Great Britain estimates it saved $8.2bn USD by opting to not use native apps over the last four years!  In 2016, a significant technology shift happened with the arrival of PWA technology. These new robust Progressive Web Apps cost a fraction of traditional native apps and boast double-digit engagement numbers while offering many of the same features. This includes features such as: offline accessibility when there is no internet or Wi-Fi available, universal access across all hardware devices ensuring no constituents are inadvertently left out, and compliance with regulatory issues such as accessibility standards and election campaign adherence.

END_OF_DOCUMENT_TOKEN_TO_BE_REPLACED

Karolyn Hart, COO of InspireHUB was featured in the IDG Whitepaper presented by Cisco "20 Ways Online Meeting Are Changing the Face of Business" as one of their top industry leaders on how online meetings have transformed their business. Below is the excerpt from the Whitepaper:

END_OF_DOCUMENT_TOKEN_TO_BE_REPLACED

Dallas Texas, December 30, 2015 – InspireHUB Inc. announced the release today of their free whitepaper "The 2016 Future of Apps: From Native to Web."

END_OF_DOCUMENT_TOKEN_TO_BE_REPLACED

Dallas Texas, October 7, 2014 – InspireHUB Inc. announced the release today of a free whitepaper entitled “The Future of Apps: Do you really need an app?”