"We have this global distribution network of over three hundred distributors and sellers. We don't get a chance to see each other very often due to the dynamics of being all over the world. What has been a real challenge for us in the past is trying to get everyone together due to the time zones and being all over the world.  We were looking for a solution that would bring our global community together so that we could all talk and share information back and forth.

What was really attractive here and what we loved was the flexibility to share content, information, current events, new product launches, or changes in a way that provided an intra-network community feel.

We are super excited about it. Our distributors like it, Seeing everybody starting to share and collaborate within it. That's my view of success and our view of success."
Tony Fonk - SpotSee Manufacturing

Councils across America are discovering the power of the IHUBApp.  Here's a few quotes!

"The benefits of the IHUBApp have been directly related to being able to package up the content into specific channels. We have saved $15,000 in hard costs and significant resource time already. At our last Council Camporee, we were struggling to get the 10,000 people signed up at the end of that campaign coming into that event. This year we created a channel in our hub and it's only August and we are already at 9,000 people. Our Camp Card sale is the best ever it has been this year."
Sam Thompson - Circle Ten Council Scout Executive / CEO

"The first thing that everyone on the staff said was ‘Oh I could use this. This isn’t hard.’  You guys are thinking deep. You’re just not managing a product. You’re not just supporting a platform I mean you’re actually looking at a tool and a tool has a use, what is our use and how can we expand that and how does it evolve. So I mean timeliness and thoughtfulness are pretty amazing things to get from a vendor. "
Daniel Anderson - East Texas Area Council Assistant Scout Executive / COO

"It’s putting the choice for the way people want to be communicated with in their hands, No longer do we have folks that are picking and choosing which emails to read or not reading any of them because of the volume that we send.  They pick and choose which communications they want, they get an alert now on their phone."
Chris Mahaffey - Mid-America Council Scout Executive

A dozen councils have already signed up to engage thousands of Scouts across America. Are you a Council? Learn how the IHUBApp can help you do more now!

"Morris Media Network worked closely with Brenda Durrant and the Greater Augusta Arts Council, their promotion team, and the InspireHUB Team, to bring the very first ever app for the Arts in the Heart of Augusta Festival.  This festival was in it’s 39th year and, with nearly 90,000 visitors, we were so excited to bring the very first app to it.

Being a part of the app team, I was there first-hand opening night of the festival and watched the engagement in real-time.  To see the users, to see the pages they were using, the pages they were coming back to, how the users were actually planning their festival, the fact that they actually had the festival in the palm of their hands, was so very exciting!"
Jamie Turner - Director of Digital Operations, Morris Digital

"For a few years we dreamed about having an Arts on the Heart of Augusta app for our phones, and when we met the InspireHUB team, we just made a wish list of things we wanted to happen, things that we saw on other festival apps, things that we knew we wanted to communicate to our festival-goers or attendees.  We wanted stage schedules, we wanted menus, we wanted maps.  We would send the information, and it seemed like in about an hour it would land on the app. It was a very quick process.  Once we gave the information, pop, we had an app!"
Brenda Durrant - Executive Director, Greater Augusta Arts Council

Learn more about how they used the IHUBApp to empower festival participants here.

"Our team was attracted to the simplicity of the IHUBApp and how it put the power of communicating online back into our hands," explains Tom O'Brien. "The flexibility of the tool has allowed us to use it as our website, our app, and our internal employee portal. It's an affordable solution that has impressed our entire staff and provided us with a sophisticated way to engage our visitors."
Tom O'Brien - President

For conference staff and vendors, they created a private channel to communicate important updates. They had the conference schedule, event map and even presentations from the conference available on their IHUBApp.

After the event was over, they were able to survey their guests to help make next year’s conference even better.

And because the IHUBApp is easy to use, they built this app in less than a week!

"Our vendors and staff loved the level of communication we had for this conference. We can't wait to use the IHUBApp for our next event!"
Fabiola Aviles, Category Manager

Learn more about the way they connected guests at their trade show like never before here. 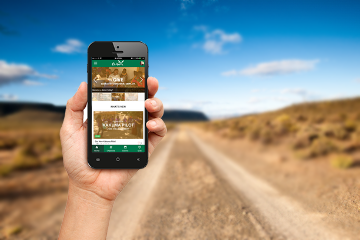 “Before IHUBApp we spent hours working on newsletters that really didn’t do much for us and we struggled with how to engage all of our different audiences. We needed something that would let us train our trainers in Kenya where there isn’t reliable internet, help our staff located in different countries communicate better, and engage our supporters around the world.

Within days of launching our IHUBApp, we saw the difference. We found new supporters from countries we had not considered and they loved that they could see all of our efforts in real-time on our app in both Egypt and Kenya. Each group has their own app experience with the Eva Wear brand. Our newsletter never did this for us and the tool even produces an automated newsletter right from the app!

This platform has helped us save time and extend our reach. It really is our hub!”